One sport has continually come and gone as one of my favourite pastimes throughout the last thirty years. I started judo at 14 years old, encouraged by my good friend Jon Wood. Joining was a no brainer for me. One of my primary school mate’s dad ran the club, and he was an ex-policeman who everyone in the community admired. A more likeable guy you would never meet. I still remember when he demonstrated a Tomoe Nage for the class with one of his police buddies. At the time, he called it the ‘Lone Ranger throw.’ I was instantly mesmerised.

The first two years of judo were fantastic years of personal growth for me. As a competitor, I placed in regional competitions and our team won the local competition, a tremendous accomplishment given we were a relatively young club. More importantly, I grew in confidence, and with more confidence, I took on more formidable opponents and fought with more gusto.

Eventually, however, injury to my lower back and other sporting commitments took over. Two years after beginning, I let my judo slide. In my early 30’s, having sold OPRA, I again engaged in judo and was amazed at how the muscle memory returned. I was rusty, for sure, but with encouragement from some familiar faces, I was back in the game. Eventually, injury and work commitments meant that judo once again went on the back burner. 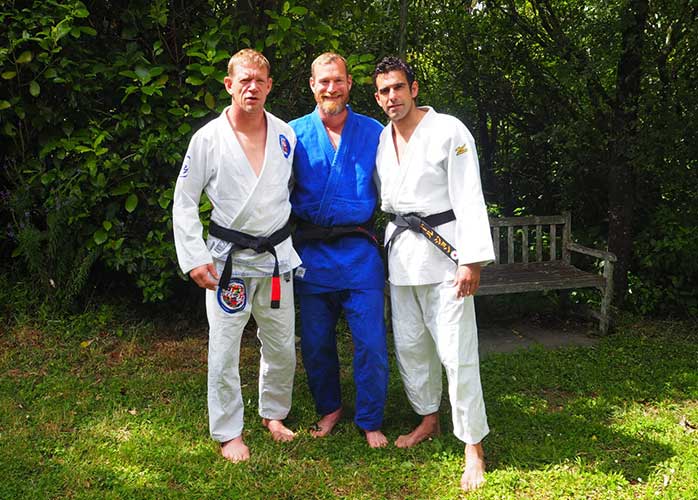 On arriving in Singapore in 2013, I decided to give judo a decent crack. I was getting old in the tooth and if I was ever to achieve my goal of attaining my black belt, it was now or never. Five years later, it was looking more never than now, but perseverance and tenacity pay off. The photo above is of Jon Wood (far left), his brother Paul, and me, 30 years after starting our judo adventure together.

Judo, more than other sport, has been responsible for my character development and much of this is down to judo’s practice as taught by its founder Jigoro Kano. Each of the lessons below is a tribute to his work as a sensei in life as much as judo. The lessons are direct quotes from his teachings.

Lesson 1: It is not essential to be better than someone else, but to better than yesterday.

Rejoining judo in my forties was a humbling experience. Watching the pace of younger athletes and realising that my days of moving that way were well passed has helped me to age gracefully, but with a fighting spirit. My competition was never with others in judo, it was always with myself – my courage, my character, and finding out who I was.

Being so much older than other judoka, meant my judo journey became more straightforward and less competitive. While my fellow students were preparing for inter-tertiary competitions, I was looking for golden oldies bouts! I soon learnt the real power of non-comparative self-esteem and the need to be better than my previous self each day.

Lesson 2: Face your fear, empty yourself, trust your voice, let go of control, have faith in outcomes, connect with a larger purpose, derive meaning from the struggle.

I can add little to this quote other than to say that this was my daily meditation. There were days when going to training was more than just a chore, it was downright difficult to walk! By deriving meaning in the struggle, one can endure much more than they believe possible by having a clear purpose. The battle is won by letting go and then trusting yourself. Doing so is a precondition to flow, and it is in states of flow that the real magic happens.

Lesson 3: To ask may be a moment’s shame, not to ask and remain ignorant is a lifelong shame.

One thing I quickly noticed was that I was continually asking questions where others would be quiet. I was the adult in the University tutorial. If wisdom comes with age, it is the wisdom to ask questions when one does not understand.

The same is true of education, business, and life in general. How many times do people pretend to know what they do not know or remain ignorant of truths? The solution, to ask questions and fill in gaps, is an easy fix if one can drop the ego.

Likewise, my failure as a business person, in sports and life in general, comes down to the failure to abide by this simple mantra. The hesitation in throwing the punch when the opening was there, only to go half-heartedly, creating the space for my sparring partner and feeling the consequence. The failure to vet builders thoroughly and have to chase them for repairs. Poor business decisions came from a failure to either consider fully or act decisively when the opportunity presented itself.

Lesson 5: Perfect yourself and contribute something to the world. This is the final goal of Judo discipline.

Life is a process, and I choose to treat the process as, in part, an opportunity for self-improvement. I want to contribute to the world, not out of altruism but because I find this personally rewarding. To me, authenticity means owning myself fully and contributing in a manner that fits my skills, nature, and personality. Judo helped clarify my life goals, and for that, I am ever grateful.

Judo has now given way to BJJ, which is easier on my body, but my love for judo has not waned. Not a week goes by when I’m watching a YouTube clip of old and present masters in fierce competition. I owe an outstanding debt to judo and will pay that back by living my life according to its teachings.