The Cross Over Benefits of Willpower 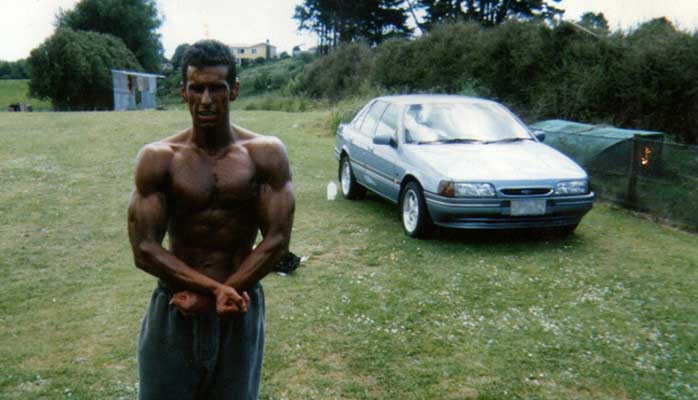 The photo above was taken 18 years ago moments before I took the stage in a regional bodybuilding competition in New Zealand.  The year prior I placed third in the show and was determined to perform better and qualify for the nationals. As this was the last national qualifier, I was, unfortunately, not the only person with this idea. Despite being a regional event, my competitors in the men’s lightweight class (under 70kg) was packed with talent from around the country all aiming to qualify. I knew that despite my best efforts (I weighed in at 69.7kg), I was in for a tough day.

To get into shape for the show I had dropped 17 kilos over the year. As I had been training and dieting for a while, I knew my body well and the weight cut wasn’t difficult. Indeed, changing one’s body composition, whether for general fitness or bodybuilding, is one of the more rewarding pursuits as there is often direct reinforcement if a formula is followed. This can be put in contrast with other pursuits that require a far larger skill component, and reward far less than one’s efforts may warrant. This is also the reason so many self-help gurus have diet and exercise books as they know that results can occur independent of skill (as is required in many life pursuits) or economic reality (as is the case is in many financial pursuits). However, while a formula is key to making body composition change, formula alone will not produce results. The formula must be actioned and this invariably requires willpower.

According to psychological science, willpower can be defined as:

While grit and willpower are often referred to as one and the same, I reinforce the view that they are best thought as complementary but distinct. To help my clients understand the difference I operationalise willpower as a finite resource that one employs in a given situation to a given task.  Much like a muscle it can be trained but depletes when called upon. Therefore, willpower is what we call upon to push ourselves through a given situation, such as pushing out that last rep or controlling our calorie intake when eating out with friends. Grit is more of a prevailing trait allowing us to achieve long-term goals despite obstacles, as discussed in my previous post.

Without getting into the research differentiating willpower and grit, this simple distinction is useful for my clients to ultimately achieve better outcomes. They understand that they will need to call on willpower at times, and having applied that willpower, will deplete it and need time to recover it before testing their willpower again. The corollary is that willpower can be developed to allow quicker recovery time and increasing willpower.

This brings me back to weight training and dieting. One of the greatest ways to develop willpower is through sustained exercise and controlled eating. Once developed, this same willpower crosses over into many executive functions such as emotional intelligence, executive presence and good decision making, to name a few. Willpower is something that is developed through experience and time.

Back 18 years and on stage in New Zealand, I had willed myself into shape and now found myself pitted against likeminded individuals who had also willed themselves into peak condition. The result was a solid second and qualifying for the nationals. While I had a stronger willpower, my sense of reality remained sharp and I knew that I was not physically gifted enough to compete at a higher level. This was to be my last competition. The lessons I learnt through competitive bodybuilding have remained with me for life, both in terms of diet and exercise. Most importantly, I had been given the perfect platform to develop willpower and become the beneficiary of a lifelong gift.

BTW: For the uninitiated, the reason I’m painted black is that this is a requirement; the lighting on stage is such that it washes out one’s definition in the absence of a fake tan.