Are You Up For the Over 40 Challenge? 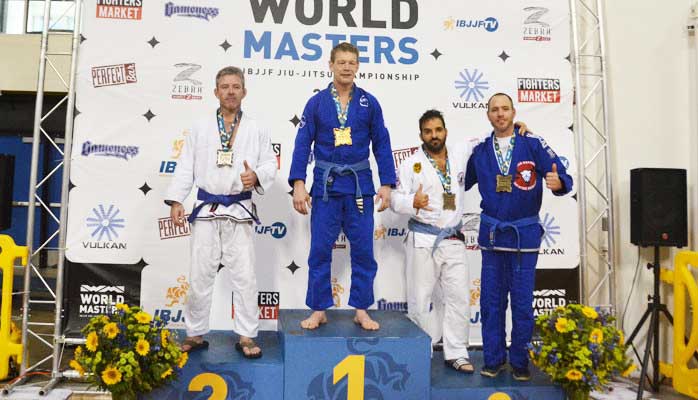 The person in the photo above, wearing the gold medallion, is a good friend of mine Jon Wood. Jon and I grew up together from the age of 12 and went through the trials and tribulations of our teenage and young adult life with many shared experiences.  Age, being what it is, has meant that Jon and I now both find ourselves in our 40’s.

Relatively recently Jon decided to compete again as a martial artist. As a kid it is fair to say that Jon was tough and he later moved on to being a Lieutenant in the New Zealand Army. However by his mid-20’s, Jon was out of the army and had not had a ‘sanctioned’ fight since that time. That recently changed.  In 2013 Jon decided it was time to get back into competitive fighting and last year won the World Masters Brazilian Jiu-Jitsu Championships in his weight class for blue belts. This came after winning regional, state and national titles on the way.

While I’m incredibly proud of Jon, both as his friend and as a New Zealander, this pride is not a cause for me to write. What I truly embrace about Jon’s achievement is the attitude that life really does begin at 40. The 40’s are a time for reflection, a time for new goals, and a time to really work to becoming the best version of yourself that you can be.

I’m now 43. While I certainly don’t feel old, I also recognise that I’m no longer a spring chicken and dreams of training to make the Olympic team are well over (to be fair were over before they begun). That said I do feel that I’m in the prime of my life. The 40’s are an age when you have enough life experience behind you to know what you want and don’t want in your life. The 40’s are an age where you can look back with satisfaction on some of your achievements while knowing there is a lot more you can still accomplish. In many ways you can be healthier, wealthier and wiser than your younger self and this gives you the power to take on new challenges.

As an executive coach my purpose is to get executives to be the best version of themselves that they can be. Whether that is reaching for new heights or getting out of a rut. I’m on the same journey as my clients and I know the effort that it takes to be a better version of yourself each day.

The over 40 challenge is to see this age as a time to realise your potential. I’m passionate about men’s health (mental, spiritual, physical) and constant improvement. In our 40’s we must create the time to improve ourselves. We have the tools from psychology, nutrition, philosophy and fitness (to name but five areas) to truly strive and attain our ideal future self.  We have the stories such as Jon’s to be inspired. It is up to each man to decide if he takes up the challenges life presents, or chooses to be beaten by his age.

This site uses Akismet to reduce spam. Learn how your comment data is processed.